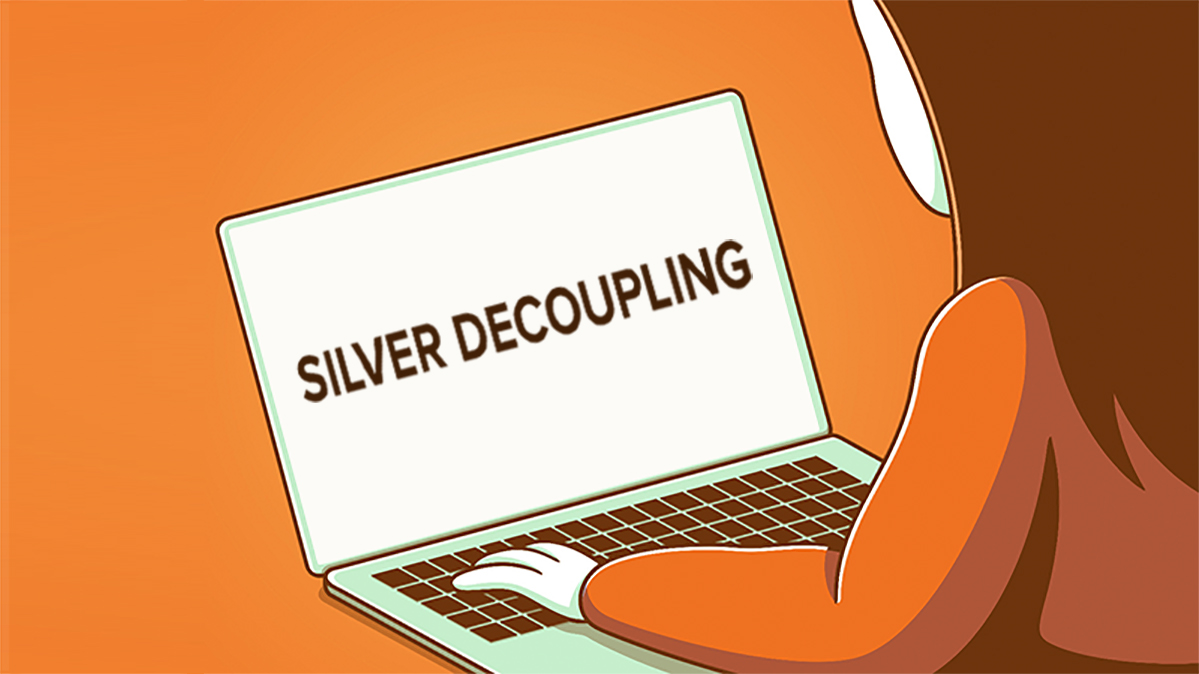 The price for real, physical silver is currently Decoupling from the artificial paper price for silver.

What does this mean? Why should you care, as an investor?

What it means is that the world’s most heavily suppressed commodity market is about to be liberated from its price manipulation for the first time in 100 years.

For investors, it’s a chance to participate in the most radical (permanent) re-pricing of a commodity in the history of commodity markets.

Let’s start at the beginning.

The True Price of silver

Humanity has been mining and refining gold and silver for nearly 5,000 years. For over 4,000 years, the approximate gold/silver price ratio has been 15:1.

The two metals exist (in the Earth’s crust) at a ratio of ~17:1. This means for over 4,000 years humanity has had a slight preference for silver over gold – relative to supply.

This is not surprising, for two reasons.

Today, the gold/silver price ratio is ~70:1. It has recently soared to extremes of over 100:1. We’re told by the media (and pseudo “silver experts”) that this is because silver is now “an industrial metal”.

This is patently ludicrous.

Silver is still a more beautiful precious metal than gold. It is still used as money by billions of people around the world. But as the world’s most versatile metal, it also has countless industrial applications.

This additional usefulness (and demand) can only make silver even more valuable – not less valuable. In other words, in any rational market for silver, the gold/silver price ratio would be less than 15:1.

Reinforcing this point, the above-ground supply ratio for gold and silver is closer to 1:1. This reflects the fact that most of the world’s silver stockpiles (accumulated over 4,000+ years) have been cannibalized and literally consumed.

Most of the world’s above-ground silver today is spread around the world’s landfills, in concentrations too low for any of it to be recovered (unless/until the price of silver reaches a rational level).

With the price of gold currently at $1830/oz, a minimum rational price for silver today would be >$120/oz.

Given the current above-ground supply ratio of these metals (and the historical preference for silver over gold), a compelling argument can be made that the price of silver should be >$1,000/oz today.

More on that shortly.

A century of artificial silver prices

Roughly 100 years ago, we saw the first “decoupling” in the silver market. For the first time in history, the price of silver was no longer priced at a rational level relative to gold.

Since that time, the price of silver has been suppressed – and not allowed to reach its fair market value.

The evidence of this price-suppression is all around us.

No one has studied the global supply of silver more than noted silver authority, Ted Butler. Butler estimated (over a decade ago) that roughly 90% of the world’s stockpiles of silver – accumulated over more than 4,000 years – had been cannibalized and consumed in industrial applications.

From a stockpile of ~10 billion ounces at the end of World War II, Butler estimated (in 2004) that only 1 billion ounces remained. He went even further at that time suggesting that the above-ground supply of gold now exceeded the supply of silver.

In a world that has always preferred silver to gold (relative to supply), if the supply of silver is less than the price of gold, shouldn’t its price be higher (i.e. >$1,800/oz)?

600-year low for price of silver (in real dollars)

Beginning in the late 1980s, the price suppression of silver (by the Western banking cartel) reached new extremes. In real dollars, the price of silver was pushed to a 600-year low. The real-dollar price for silver has moved only fractionally since then. 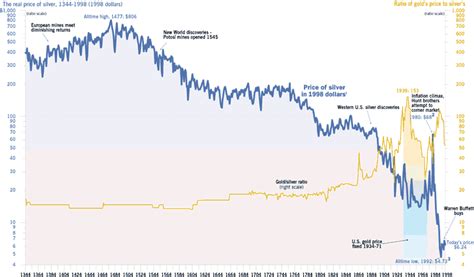 The world is running out of silver

Thanks to silver price suppression, we no longer have an adequate supply of silver. The global silver market has been in a permanent supply deficit for over 30 years. Between 1990 and 2005 alone, global silver inventories collapsed by 90%.

Thanks to silver price suppression, we no longer have abundant stockpiles of silver.

As precious metals, gold and silver have (historically) been conserved by humanity. The gold is still conserved. The silver is gone.

To summarize the current state of the silver market:

The “official” price for silver in the global silver market is currently ~$26.50 per ounce. But this is a paper price. It is the (heavily manipulated) price at which the bankers trade paper ‘silver instruments’, paper called “silver”.

In official testimony to the CFTC, self-described precious metals expert Jeffrey Christian stated that only 1% of the trading in the gold market was actual metal.

All the rest was trading in paper-called-gold. Experienced silver traders strongly believe the silver market is even more heavily leveraged (falsified) with paper-called-silver.

A totally artificial market. The bankers can create infinite quantities of this paper-called-silver with a mouse-click.

Real silver has to be mined out of the ground. There is a significant, real-world cost to that.

Obviously, the price for silver, the world’s most-useful metal, has to be more than what it costs to mine silver out of the ground.

In the bankers’ fantasy market for paper-called-silver this minimum fair-market price for silver is never, ever mentioned. The bankers simply pretend that real silver can also be conjured into existence with nothing more than a mouse-click.

Now, after 100 years of price suppression, with global silver stockpiles gone, the silver market has begun to re-price itself – in a manner that is totally out of the control of the banking cartel.

There are now two prices for silver.

-  One (fraudulent) artificially low price: the price for silver in the bankers’ paper-called-silver market.
-  One (legitimate) real price for actual metal: the price that people must pay to buy (real) silver directly.

While the phony artificial price for silver is currently $26.50/oz, real silver costs anywhere from $35.50 to $39/oz at official dealers – if you can find it. And even more to purchase in private sales. 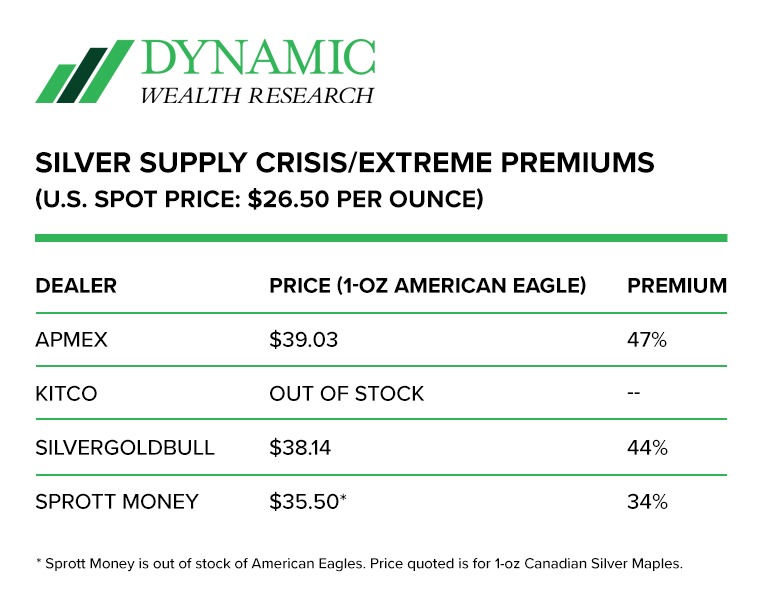 Decoupling in the silver market has been happening gradually for well over a decade. So-called “premiums” to buy silver from Western bullion dealers have increased from a few percentage points to (generally) at least 20% above spot price.

Bullion-buyers in India (the world’s most sophisticated precious metals consumers) would choke if they ever saw so-called “premiums” paid by Western buyers to acquire real metal.

Now this Decoupling is becoming more extreme – and highly visible. It can only have two possible outcomes. Both lead to much, much, much higher silver prices.

In the face of Decoupling, the bankers can relent on their permanent/extreme suppression of the silver market and allow the price to float freely. If that happens, we know the price of silver will quickly soar above $100 per ounce.

The gold/silver price ratio dictates a silver price of at least that level. And lower prices cannot restore balance to the silver market.

Between 2009 and 2011, the price of silver soared to a high just below $50 per ounce. That wasn’t even enough to temporarily eliminate the supply deficit in the silver market – let alone begin to rebuild 4,000 years of cannibalized stockpiles.

A three-digit silver price (sustained for many years) is the minimum price necessary to rebuild the global silver mining industry and – eventually – repair this broken market.

A much higher price must be sustained for many years because of the mining supply cycle. It can take as long as 10 years from making a silver discovery to commissioning a new mine.

Past-producing mines can be returned to production somewhat sooner. But several years of higher sustained higher prices would be required (as a minimum). And those higher prices must be permanently maintained, or supply will quickly collapse again.

Allowing the price of silver to float freely (for the first time in 100 years) is the easy way to restore balance to the silver market. If the bankers persist in their silver price manipulation – in the face of Decoupling – we will see the silver market fixed the hard way.

You want to buy (real) silver? You can pay $38 - $39 ounce from a bullion dealer for a 1-oz American Eagle (until they run out of stock). You’ll get a small discount on bulk purchases.

Or you can come to the bankers’ Comex futures market. You can buy one of their silver “contracts” at $27 per ounce. And at the end of the month, you can take delivery on real metal.

This was happening (in a big way) when we saw the price of silver dramatically Decouple in March 2020. It’s happening again today – already.

Larger players are buying-on-bulk at the Comex and seeing how long the bankers can/will supply metal at this artificial price before there is a formal default on delivery.

A formal silver market default is a gigantic red flag that there is a silver supply crisis. If you are a corporation requiring silver for industrial purposes, you have two choices at that point:

a)  Go out of business
b)  Buy silver, wherever you can find it, at any price

With a formal, inventory default, the “fair market price” for silver becomes temporarily irrelevant. All that is relevant is that buyers who need silver and buyers who want silver will be competing for near-zero supply – with the official market completely broken.

A new century for silver

After 100 years, the silver market is about to be re-priced: back to a fair/rational price for silver that will repair a market that has been (literally) destroyed by the serial price manipulation of the banking cartel.

The Big Banks have been criminally convicted of perpetrating virtually every form of precious metals fraud imaginable. Now, the proverbial jig is up.

Silver is going to be permanently re-priced. The new/fair price for silver is guaranteed to be many multiples of the current price.

Over shorter periods, the price of silver could easily increase by more than an order of magnitude (i.e. a ten-bagger).

For investors looking for other ways to play this opportunity, the small number of companies currently mining silver will leverage these price gains – as all mining companies do.

The greatest commodity re-pricing in History is about to begin. Get in now, or you might miss the party.